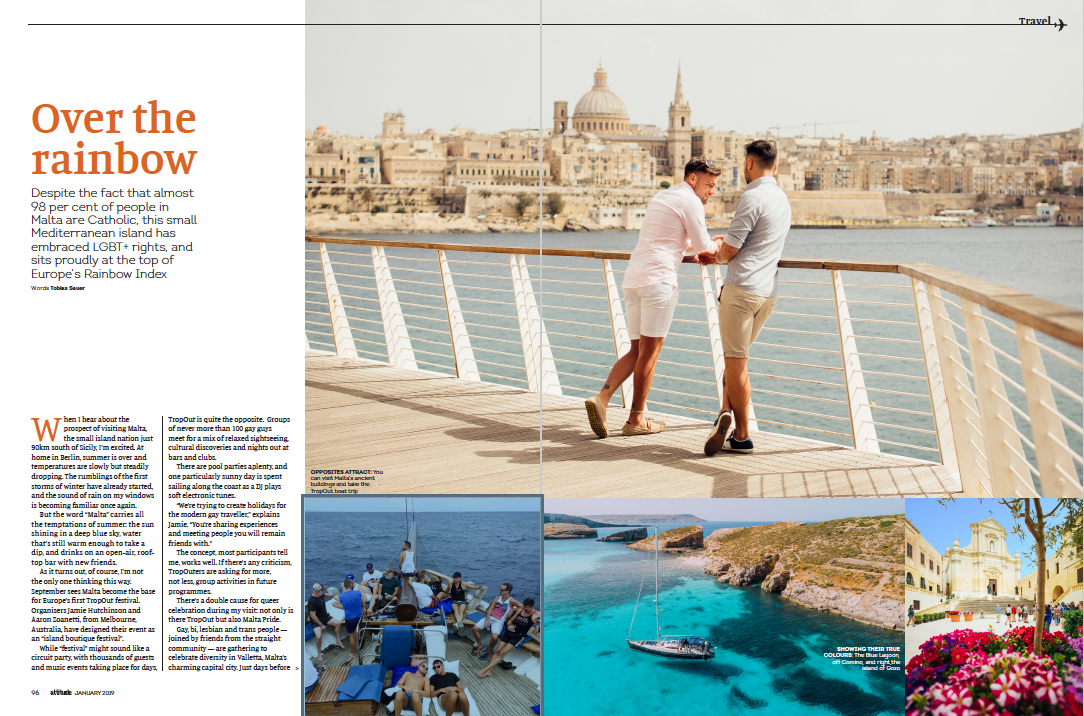 Dezember 2018 | Attitude – Despite the fact that almost 98 per cent of people in Malta are Catholic, this small Mediterranean island has embraced LGBT+ rights, and sits proudly at the top of Europe’s Rainbow Index.

When I hear about the prospect of visiting Malta, the small island nation just 90km south of Sicily, I’m excited. At home in Berlin, summer is over and temperatures are slowly but steadily dropping. The rumblings of the first storms of winter have already started, and the sound of rain on my windows is becoming familiar once again. But the word “Malta” carries all the temptations of summer: the sun shining in a deep blue sky, water that’s still warm enough to take a dip, and drinks on an open-air, roof-top bar with new friends.

As it turns out, of course, I’m not the only one thinking this way. September sees Malta become the base for Europe’s first TropOut festival. Organisers Jamie Hutchinson and Aaron Zoanetti, from Melbourne, Australia, have designed their event as an “island boutique festival”. While “festival” might sound like a circuit party, with thousands of guests and music events taking place for days, TropOut is quite the opposite. Groups of never more than 100 gay guys meet for a mix of relaxed sightseeing, cultural discoveries and nights out at bars and clubs. There are pool parties aplenty, and one particularly sunny day is spent sailing along the coast as a DJ plays soft electronic tunes. “We’re trying to create holidays for the modern gay traveller,” explains Jamie. “You’re sharing experiences and meeting people you will remain friends with.” (…)